In 1803 Thomas Telford, the great bridge and canal designer, thought the answer would be to  create large reservoirs in Montgomeryshire which would conserve water when the rainfall was high and then release the water into the Severn when it was too low for navigation. Believe it or not, the Severn has had more problems from droughts than from floods!

It wasn't until 1964 that Telford's idea came true. The Clywedog reservoir was built for regulating the River Severn. Located upstream of Llandiloes, it can hold 50,000 Ml of water. During the winter the reservoir retains extra water, which gives a slight flood relief to upper reaches of the river. In the summer when river levels are low, water is released to help maintain supplies to the six million consumers along its length.

Nature provided the floodplains to contain the overspill of floodwater from the Severn, but one area that decided to build on the floodplains was Worcester. Over the centuries this land has been on which has led to considerable flooding problems further downstream, as once the natural flood storage area has been reduced, the water flows on until it can find a place to overspill.

Flooding doesn't only cause problems for those living and working adjacent to the river, as river craft are unable to navigate the Severn due to the restricted air-draught at each bridge. Between Stourport and Gloucester are located marker posts, upstream of each bridge, giving the air-draught in metres. Skippers must know the highest point of their craft before deciding to navigate under the bridge. 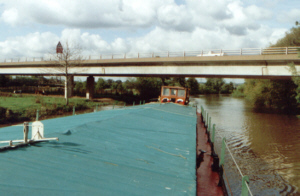 Grain barge TIRLEY under a bridge in floods

One of the many problems confronted by commercial barge skippers on the Severn is flooding. The river rises so rapidly that whilst leaving Tewkesbury at a safe level with an empty barge, by the time Gloucester is reached the Severn may have risen another foot in height. No chance of stopping should the skipper have misjudged his calculations, with inches to spare shooting under the bridge calls for

Getting an empty barge around the notorious tight "S" bends in The Parting also calls for great skill, one wrong turn of the wheel and the barge will crash into the bank and through the trees, unable to stop with the strong current pushing from behind.

Farmers believe that land which is subjected to having flood water lying on it each year make it more fertile. During the 18th century they thought it would be a good idea to have flood gates, which could be opened in the winter and closed during the summer to stop their crops being washed away.