Opened by Lady Hooson in 1992, wife of the chairman of the Second Severn Crossing. It may be small, but just as pleasing to the eye as the last bridge on the Severn.

Located downstream to the Hafren Forest tourist car park. The bridge was rebuilt to coincide with the re-opening of the footpath.. Nearby is the wooden trestleway which follows the Severn for quite a long way towards the source.

First road bridge on the Severn. Used by the forestry workers, it is of basic reinforced concrete construction.

The locals call it “Paddy’s Bridge, the Forestry Commission would rather call it “Irish Bridge”. Which ever you choose, a strange name for a bridge in the heart of Wales!

Constructed to give visitors a good view of the waterfall and small gorge. An impressive sight when the river is in spate.

A bridge has occupied this site for many years.

The river was previously crossed by a wooden footbridge before the construction of a road bridge in 1896. When replaced in 1972 the original foundation was incorporated into the current bridge.

One of two identical footbridges located near to the site of a once flourishing woollen mill.

Cancoed Mill burnt down one Saturday night during circa 1922.

Originally the bridge was built of three timber bays on two stone abutments to carry the road from Llanidloes to Llangurig over the River Severn. The bridge was re-built at a cost of £600.

Named after Colonel Davies-Jenkins of the nearby mansion who was instrumental in replacing the old wooden footbridge with a cast iron one. The present structure is all timber and often referred by locals as Pennygreen Bridge.

Construction began in 1849 and the plaque reads:

This bridge was built to replace and old and dangerous wooden one. It dated from 1741 and was only used as a carriageway in times of flooding. At other times it was safer to use the ford!

A timber bridge built for the Llanidloes and Newtown Railway, later becoming the Cambrian Railway. The line was closed in December 1962 and the bridge became derelict. Now it is used as a farm access bridge.

The first iron bridge to be built in the county of Montgomeryshire. Now has a weight restriction of 3 tons.

Timber construction. In 1868 the River Severn flooded and carried away the railway embankment causing the train from Newtown to crash, killing the driver and fireman.

Constructed of stone with three elliptical arches. During flooding it is quite common for the waters to reach the top of the arches.

One of several footbridges built across the Severn.

Located on farmland of the Penstrowed Hall Farm.

The bridge is located near an old railway halt which is now occupied as a private residence. The line is still in use.

Built to replace a wooden bridge and infirm as it was it stood the ravages of the flood of 1795. Thirty years after it was built there was a serious accident on the bridge caused by its narrow width. Thus a footpath was added in 1857.

Serious flooding in Newtown swept away several footbridges. This bridge has been built higher and incorporated into the Newtown flood defence scheme.

Located on the B4389 which was once a turnpike road. It was built under the Cilgwrgan Bettws and Tregynon Road Act of 1860.

The bridge was built by Wallace Evans & Partners.

Built by Brymbo Company of Wrexham. This bridge replaces one which had been located 300 yards downstream and swept away in a flood of 1851.

Another of the classic David Rowell bridges to be found crossing the Severn.

A previous bridge, built of timber collapsed following the floods of 1852. This was replaced by a James Dredge designed suspension bridge in 1854, but by 1858 this had also collapsed!

Built to replace a wooden bridge which had become unsafe. Oswestry & Newtown Railway Co rebuilt the bridge when constructing their railway bridge (see 36)

Constructed of steel on stone pillars, it was built to carry two railway tracks but now only a single track passes over the bridge. The base of the centre pillar has been rebuilt, encased by steel piles and infilled with concrete.

Prior to having a bridge here the river was crossed by means of a ford, although people found this to be quite dangerous.

Located close to the road bridge, it is a typical steel railway bridge to found crossing the Severn.

Constructed of cast iron it was built to replace a wooden bridge.

The highest point of the Severn that trading vessels came to. Nothing now remains of that era. 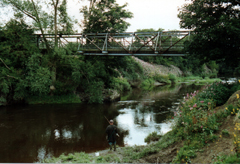 From here can be seen the Welsh mountains, capped with snow on a cold winters day.

All photographs taken by Chris Witts unless otherwise indicated